It was at the start of 2012 that I saw Gary’s ad online. He was looking for 15 fellow travellers for the adventure of a lifetime: Reykjavik, in Iceland, to Cape Town, in South Africa, overlanding through Europe and down the entire western coast of Africa in a modified 1977 Bedford. The journey was to take 6 months and would clock up more than 20,000km across 22 different and diverse countries.

It was almost an entire year after reading that ad that we finally set off from the Icelandic capital, giddy at the prospect of the epic journey ahead of us. Within three weeks we had crossed Europe, and by the end of January 2013 we had arrived in Africa… 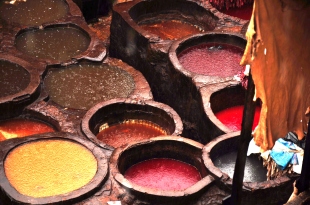 Having crossed from Malaga, Spain, our first taste of the continent was to be Morocco, a country that plays to all the senses. Tanneries like this one in Fes are common to all city medinas in Arab Africa, leather being a particularly important export. But it’s thought that this one is the oldest in the world, dating back to the 11th century. Dozens of stone vessels are filled with vibrant dyes of red, yellow, orange, brown, blue and purple on what looks like a giant artist’s palette. But you can smell Fes’s tanneries long before you see them, for each vial contains a heady concoction of quicklime, pigeon droppings, animal blood and various other traditional ingredients.

In southern Morocco we got our first glimpse of the Sahara. Its golden sands would accompany us south all the way through the disputed territory of Western Sahara and then Mauritania until we reached Senegal. I had initially thought the desert to be an empty place, but I was wrong; it was alive and full of people with many stories to tell. On one night of our journey we were the guests in the warm, cosy tent of a Bedouin tribe living impermanently beside the Atlantic. They taught us to make tea as the sun went down to reveal a perfect night sky.

“There are two kinds of Africa: the White Africa and the Black Africa. In Senegal you enter the Black Africa.” – that’s what a local told us at the border between Mauritania and Senegal. And he was right. As you pass into Senegal, suddenly the landscapes change, the heat intensifies, the humidity escalates, the people become louder and the roads become busier. You enter a new world – the ‘real’ Africa, some say. It’s here that the continent’s percussive rhythm starts to enter your soul. Kids begin following you around with wide smiles and excited expressions. Your love affair with this incredible continent begins.

On the southern shores of Ghana I came across the beautiful and charismatic coastal village of Elmina, its narrow alleyways bustling with activity and its golden beaches full of colourful “pirogues” (a narrow-hulled boat typical to these parts of Western Africa). But if I had stood in this spot several centuries earlier I would have likely witnessed a much sorrier scene, for the vantage point was provided by the castle of São Jorge da Mina, where millions of Africans were imprisoned before being shipped off to the other side of the Atlantic for a life of slavery. It seems impossible that such a convivial, energetic place should have such a dark and dispiriting history.

Neighbouring Ghana is the small but proud nation of Togo, and in its capital of Lome I came across what is apparently the biggest Voodoo market in the world. These rather gruesome (but very neatly aligned) stuffed heads were just some of the fetishes, or ‘traditional medicines’, on display.

The lake-town of Ganvie, in Benin, owes its existence to the Tofinu, a West African tribe who, realising that the Fon warriors of the slave-peddling Dohomey Kingdom were forbidden to enter water on religious grounds, decided to build their homes upon stilts in the middle of a lagoon. This simple act of pragmatism saved them what may well have been a life of enslavement and misery. The town stands to today as a testament to their resourcefulness and ingenuity. The tourist officials, however, prefer to think of it as the “Venice of Africa”.

Ever since we passed into Nigeria, conditions on outlying roads had been gradually getting worse. By the time we reached Cameroon, the trucks, usually so steady on these sort of surfaces, were beginning to struggle, and scenes like these were all too common. It’s often days before they are back on the road, particularly in mountainous areas.

The daily routine on the Congo, one of the longest, largest and most mysterious rivers in the world. There is only one bridge that spans it, and that it is in Matadi, a town belonging to the Democratic Republic of Congo. Here, in the other (but still democratic) Republic of Congo, the only way to cross the river is to wait in line and get on board one of these little rafts. Our truck barely fit!

And here we are, 22 countries and many thousands of miles later, on the southern cape of Africa, looking out toward the South Atlantic. Our incredible 6-month journey was now behind us, but we would have memories to last a lifetime.

Manu Grieco is an Italian travel-addict currently living in Amsterdam. She blogs about her experiences at my1stimpressions.com

Manu was using a Nikon D90.

Photo of the Day